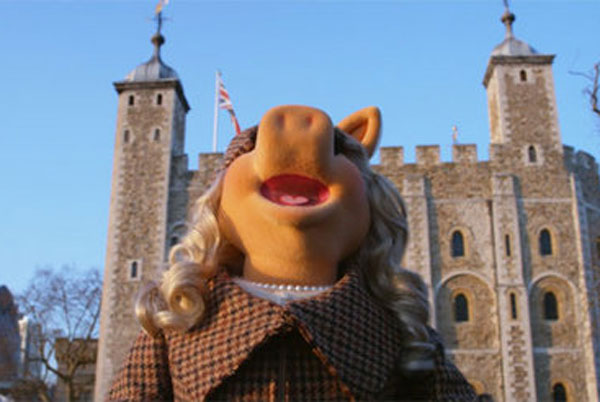 By mandfilmsadminMarch 10, 2014January 14th, 2015Factoids, Muppets Most Wanted
No Comments 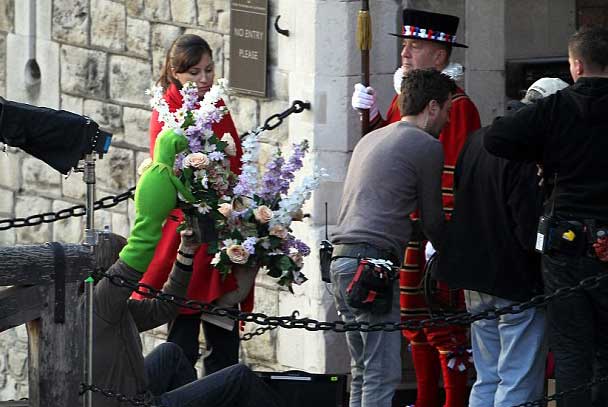 Did you know that The Muppets Most Wanted had the first major film crew ever allowed inside the walls of the Tower of London to shoot?  Did you know that the original “The Muppet Show” movie was also shot in London?  If you’re suprised by this info, you’ll be interested to know 8 more facts from veryaware.com:

8. It’s a logistical challenge to film a Muppet movie. Says Bobin, “Muppet films are never easy to film ‘cause the Muppets have no legs. You may not notice this but they have no legs so things get very complicated wherever you go. So it’s easier indoors – you’ll notice that a lot of work now is on stage but what I love about Muppets in the real world is they live in the real world and you create a sense there’s a—there’s a real world out there whereby Muppets and humans happy co-exist. Which is my favorite thing. I think it’s an illusion we all want to believe in. On location, the puppeteers perform on the ground. We have to raise things like door handles and various things like that to help us out. So it’s all quite technically complex but on stage it’s very straightforward because we then just raise the entire set five feet up, four feet up in the air and the cameras come up four feet in the air and the puppeteers themselves can then stand up. ‘Cause that means they can kind of group together as closely as possible. That means you have nice group shots rather than being all far apart.”

7. The song and dance numbers were a fun but a challenge for the non-vocal or physically inclined human talent. Gervais says, “I was okay with singing. I’m a failed pop star.  I always sneak a song into everything I do, whether it’s David Brent or Simpsons or but, my dancing is a little awkward. A little embarrassed about that. I don’t move well. But I was with a frog. So it doesn’t matter. I’ll do anything with a frog.  That’s—that’s my motto.” Constantine dryly adds, “That is nothing.” Gervais continues, “And he was a, he’s a great tap danc—well, more a flap dancer …” Constantine interjects, “I did flap dancing.” Gervais picks up with a smile on his face, “Yeah, flap dancing on my head. No one’s gonna be looking at me when—when we’re doing that dance. They’re gonna say there’s a frog dancing. I got away with it.” Tina Fey says to Gervais, “You have a good voice. My singing sounds like if you’ve ever seen the version of Oliver when the little boy sings and you can hear the hiss of how loud they had to turn up the microphone – my singing sounds like that.” Kermit rallies to her defense, “No, no that’s not true. You were great!” All joking aside, Fey adds, “Bret wrote really really good songs that make us seem good.” Ty Burrell says he was happy not to sing. “America and the world were spared my singing voice except for two notes. I don’t know if you noticed that. I think it was by design. I spoke, I spoke my song but I was thrilled to do it. I am huge fan of Bret McKenzie.” Sam The Eagle rallies to his frequent scene partner, “You are selling yourself short. You are a great singer. A great actor. And a great American!”

6. This wouldn’t be a true Muppet Movie if there weren’t a boatload of celebrity cameos.Bobin begins, “Nick and I write the script we’re writing peoples names in often and obviously certain people have to be that person like you can’t do the Christoph Waltz joke with anybody else because it is about a waltz so that’s impossible.” Producer Todd Lieberman says, “That one was reverse engineered in a way. Because a lot of the cameos, we have a list of people who want to be in the movie and then as these guys go through writing the movie, we gather other intel of fans and people we like and people that like us and then we kinda do this grid. Christoph Waltz specifically was one where he was a massive fan of the first movie and really wanted to be a part of this one and so that joke was reverse engineered. But there’s so many people who love the Muppets and it’s kind of, it’s an interesting matrix to put together to figure out where people go correctly and how to fit all the people that love in the movie which, you know, hopefully we’ve accomplished.”

5. Kermit didn’t want to play himself and the villain. Naturally, the affable amphibian actor has got a great explanation why. He says, “Well, you know it didn’t make sense for me to play Constantine ‘cause we do have a few scenes together and I don’t really work on green screen. So we couldn’t really make that work. Plus, listen Constantine is actually a distant cousin, from Russia – with roots in the Colorado area I understand. So it was better to get him to do it. He has the voice you know.” Constantine concurs, “This is true. But what is weird thing is I cannot speak any Russian words.” Tina Fey adds, “You were born in the Russian airport.” Constantine says, “Yes.”

4. Composer Bret McKenzie felt pressure following up the Oscar winning ‘Man or a Muppet?” So he rented out a store in an LA strip mall on Hollywood Boulevard as his workshop. He says, “ It was like this sorta dusty old shop to hide away and work on these songs and these guys came and visited, to listen to the demos and it was quite a funny scene because people would be walking by hearing this, me hitting on, playing the piano and occasionally—occasionally they’d walk in and they’d say, ‘is there music lessons going on here?’ Or what is this?  Is this some sort of art installation? We liked to call it ‘Muppet Solutions.’” Bobin says, “Yeah, literally it was very weird ‘cause the—the shop window is still right there so you could just see Bret at the back of the room just playing his piano as you look in on this lighted shop. It was very strange.” Lieberman concurs, “There was nothing in there other than a piano in the back of the room and a little couch. You could go in there and think either you’re gonna get killed or you’re gonna hear some music.”

3. Constantine is planning to leave crime for Hollywood life. But we think he’s joking based on his constant ribbing of seatmate Gervais. He says,  “I am actually thinking about doing new Netflix original programming. I will call it House of Toads. I will executive produce and show run. So let’s take meeting, yes?”

2. The sequel was originally called THE MUPPETS AGAIN. Says McKenzie, “The first song we’re doing a sequel ends with the Muppets all singing ‘it’s the Muppets again,’ because we’d thought it be great to, you know, the song to have the title of the movie in it but then well after we’d filmed it all, marketing decided to change the name of the movie. We tried going ‘it’s the Muppets Most Wanted,’ and, it really didn’t sit very well on the mouths of the Muppets.”

1. Brett McKenzie has a direct phone line to Kermit. And, duh, it’s on an actual Kermit The Frog phone. McKenzie states, “Having worked on the first film, Kermit sent me a Kermit phone which is a direct line to him. Once you’ve worked on the Muppets we all have these.  It’s like …” Bobin quickly chimes in on the whimsy, “I have one of these in my house too.” McKenzie says, “It’s like the bat phone. He calls up and says you know, ‘I need a song. A finale, you know? Can you work on that please?’”